After much debate last night, which revolved around ‘how much further is it really to drive around to the Northern Corries rather than going out to Linn of Dee – it can’t be that much longer, can it?’, we bit the bullet, got up way before the crack of dawn (sort of) and embarked on the drive to Aviemore and the north side of the Cairngorms with the intention of going up Ben Macdui. An agonisingly slow journey caused in part by freezing temperatures but mainly by lorries cruising at below 40mph with nowhere to get past soon convinced us of the error of our ways.  As we disembarked at the ski car park it was surprisingly busy, with a number of minibuses disgorging keen hill walkers. And as we started heading for Coire an Lochan the paths were alive with brightly dressed large groups of people. 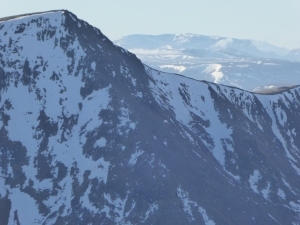 As regular Southern Cairngorm mountain goers we’re very much used to days when we see either no-one or maybe just one or two people – and hill etiquette of a cheerful greeting and a quick chat is pretty much always observed.  Today was a different matter. We merely got a brief  ‘hi’ out of most people that we passed. When there are those kind of numbers out on the hill the whole ‘meet and greet’ thing becomes no longer viable – as it simply slows everyone down too much. The other thing that I noticed was the average size of rucksacks, which generally looked to be reasonably small and no match for the dimensions of my pack. How, I wondered, did most people manage to cruise by with sleek, streamlined rucksacks while there was I, plodding along like a packhorse (and that was after having learnt a valuable lesson about heavy rucksacks at the end of last month).  Perhaps it was my ‘battlebread’ sandwiches that were the problem (bulky and completely inedible, aka ‘multigrain rolls’ and sold by a supermarket which shall remain nameless).

That aside, it was a stunningly clear day with uninhibited views in all directions. Any remaining snow was hard névé, just about manageable in my old Mantas without the need to resort to crampons, but you had to be on the lookout for hard icy patches, otherwise you’d suddenly find your feet going from under you – not good on a slope where the consequences of a slip could be dire but these gentle snowfields gave no such cause for concern. The sunset, viewed from Cairngorm itself, lacked the fierceness of last week’s skies, but provided a spectacular sequence of colour changes over the ridges of the Northern Corries. The final part of our descent back to the car park was done in darkness. As we arrived at the car we looked back to see the lights of many other headtorches making their way down Coire Cas. We were not alone …. it sure is busy ‘up north’.