It always happens on the way back. The track ‘goes ever on and on’, you’re tired, very tired. The rucksack seems to be increasing in weight with every mile covered, despite most food and drink having been consumed. Time starts to stretch into that forever zone. Then your brain starts to say, ‘But I really don’t remember it being this long on the way out.’

Fisherfield is billed as one of the last true wilderness areas in Scotland. Some of the more remote Munros are located here, but there are also a number of equally remote Corbetts, of which Beinn Lair is one.  This is an account of a personal hill day undertaken in June 2015.

We knew that this was going to be a very long day. We asked the hotel until when they would be serving food that evening, but we’d known in advance that there was not really much hope of being back in time. Perhaps we were secretly hoping that some kind person might take pity – or be really impressed – and say ‘Wow, you’re doing Beinn Lair! That’s a really long day and you’ll be needing food when you get back. We’ll set something aside for you. All you need to do is to ask at the bar.’ But no, the guy at reception just about deigned to make a note of where we were going and grudgingly – under great duress – jotted down the ‘panic time’ (such details are always given in the eventuality that something happens out there…).

And so we set off on a day when the temperature was just right for walking. We were ‘out west’ in the midst of some stunning scenery. Strangely enough, the midges (who can be utterly horrific in a way that is unique to west coast midges) weren’t too bad for the middle of June. It was simply an idyllic scenario. The distance to Kernsary fell away beneath our feet but when we reached our junction to take us up towards central Fisherfield a scene of carnage met out eyes. Forestry vehicles had churned the track up so badly that we were dodging large pools of stagnant water and paddling in deep mud which, in my case, inevitably worked its way onto and into everything. This was not a day for refusing to put on gaiters (which, as the photo shows, was exactly what I did!).

We met a Duke of Edinburgh party just after this section, who were walking out to Poolewe after being on expedition. They were impeccably turned out and spotlessly clean. However, their blank stares on mention of the words ‘very muddy’ and their lack of gaiters (at least my muddy state was brought about through contrariness rather than lack of kit …) suggested that they might be in for a rough couple of miles.

But for us, the bulk of the day still lay ahead.  So, walk, walk, walk. The scenery was huge and the sense of space vast. Whichever way one approaches, the Fisherfield area demands a very long walk.  We walked past Beinn Airigh Charr (791m), another Corbett – done (relatively) lazily by partly using bikes on a previous day  – and we both remembered the length of that day as we gradually drew level and then put it behind us. We walked past Meall Mheinnidh (classed as a Graham) and already we were discussing ambitions for bagging it on the return journey. We got to the point at which we could see the Causeway that separates Fionn Loch from the Dubh Loch and at that point followed a stalker’s path up to the col between our objective and Meall Mheinnidh.

Once past the Bealach Mheinnidh area the ascent of Beinn Lair was up long gentle grassy slopes – still a fair distance, but eventually we arrived at the summit. At 3 miles, Beinn Lair has the longest line of inland cliffs in the UK: the precipitous side of the hill faces NE while, in abrupt contrast, towards the SW the mountain gently rolls away down to the shores of Loch Maree. With a kayak, Beinn Lair would be just a quick paddle across the Loch and a fairly short day, but that would hardly do justice to this very fine hill. The summit area itself is plateau large and flat, and seems to stretch forever in all directions. We enjoyed the privilege of being on one of the more remote hills, revelling in the fact that we had it to ourselves. Weatherwise, it was a glass half full situation, with a bank of cloud sitting out to the coast, while the Torridon peaks were in bright sunshine: we were sitting (or in Iain’s case, sleeping) under an ever-changing interplay of cloud and sunshine.

The dawning realisation that the hands on my watch had been in unexplained fast forward mode prompted me to remind Iain that we had a very long return journey to make.  Back down to the col where an argument about whether to include Meall Mheinnidh or not started to brew. There was no point in bringing the outside chance of getting back on time for food into the discussion as we were long past the turn-around time for that. In the end it was difficult to argue against the fact that we were there and to come back for Meall Mheinnidh on its own was nonsensical (although others might care to differ!). So 230m more of ascent and then the descent of some very bouldery and at times slippery terrain followed. As we rejoined the path we were both starting to feel hints of tiredness. Once again, walk, walk, walk. Walk, walk, walk. I kept turning around to see if the scenery behind was diminishing in any sense. It took a very long time before the mountains began to shrink into the distance. 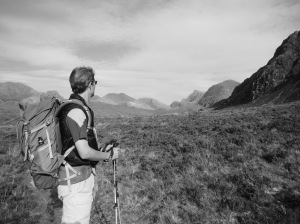 We re-negotiated the muddy stretch (me with gaiters still resolutely packed in rucksack), emerged at Kernsary and then trogged out along the track, back to Poolewe. Time 13 hours – could have been less if someone hadn’t decided to have a sleep at the summit of Beinn Lair, if we hadn’t needed to grapple with that muddy section and if we had missed out the Graham.

Supper was a sorry affair of oatcakes, cheese and whatever else we could find that had been left in our room, procured from a supermarket the previous day. Drinks in the bar restored spirits and we started to feel that special sense of incredulity that you get after an epic day in the mountains. The ‘I can’t believe that we really did that.’ But we were pretty desperate for breakfast by the following morning….

[Note: the reference to ‘goes ever on and on’ is, of course, taken from Tolkien. It appears in various guises in The Hobbit, The Fellowship of the Ring and The Return of the King.]